Posted by Robyn in Child protection, News articles on 12 Jun, 2015 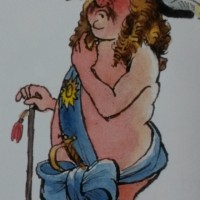 Child Protection Week has come and gone.  If you failed to notice, you’re not alone. Given other pressing issues like fire-pools, football and financial rewards, it wasn’t highlighted very well. These days government seems to be too busy defending itself to also be defending our vulnerable children.

In the context of the $10million alleged FIFA bribe, R240million Nkandla alterations, another R17 million golden handshake for an official appointed by Jacob Zuma, and our president granting himself an additional R130 000 per annum in salary, perhaps it was too much to ask the nation to focus its attention on what—despite the heroic efforts of many advocacy groups—was frustratingly reduced to yet another ‘issue week’ by Government’s lack of leadership.

As a historian, a sociologist and a fervent advocate for the new South Africa, I have spent years championing my country against the naysayers who have prophesied its doom.  I have always been the first to contextualise problems with education, the health care system, economics, housing, and even crime in terms of our colonial past and the devastations of apartheid.  I have been unwavering in my belief that it would all end well.  But now I am not so certain, because disregarding our children in favour of our own agenda is an evil that is indefensible.  No amount of politically motivated grandstanding on Youth Day is going to change that. Nelson Mandela said: “There can be no keener revelation of a society’s soul than the way it treats its children.”  They are words that testify against us—if they are true, we are failing as a nation.

A couple of years ago a President Jacob Zuma ally turned adversary, Kenny Kunene, used the famous analogy that ‘the Emperor has no clothes on.’ Like him, opposition politicians, critics, journalists, activists and ordinary citizens have pointed fingers at the Zuma-led administration about skewed priorities that have exposed us all. Now it is our children’s turn to cry out. All we can hope is that as in the Hans Christian Andersen tale, it will be a small child who finally makes our laughing emperor feel some shame.