Posted by Robyn in Child protection, News articles on 21 Oct, 2016 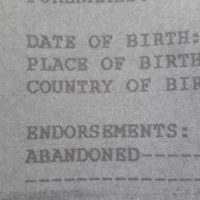 Child abandonment is a scourge in South Africa. As numbers soar, the battle is on to ensure that abandonment does not permanently define the lives of survivors. But those efforts are being severely hampered by the Department of Home Affairs’ decision to disclose to the public the abandonment status of some children. As a practice, it is shockingly callous, largely inaccurate and probably indefensible, so why is the department seemingly impervious to all of the concern?

There seems to be no end in sight to the abandonment crisis in South Africa. And, in the absence of long-term policy solutions, child protection practitioners aim at least to make it survivable, both physically and – for those who do stay alive – in its emotional aftermath.

To this end, they have dedicated huge amounts of time and skill to researching strategies for protecting children from the consequences of what may be the first event of their lives. While these solutions are complex, they are all predicated on maintaining the privacy of the child’s story until they are ready to face it and relate it to others.

Clearly these thinkers did not reckon on the Department of Home Affairs though. Like a school yard bully, the department seems determined to humiliate these vulnerable children by including an endorsement on their official identity document that broadcasts to the world in general that the child was “ABANDONED”.

Of course it is possible that there was no intent at all, and that the department was simply absent on sensitivity training day. But the crass use of such a loaded term on a public document still beggars belief.

And, as they say in the classics, that’s not all. It also appears that the department has a somewhat loose definition of what it means to be “abandoned” (certainly not in keeping with either the Children’s Act or common usage). As a result, it has included the endorsement on the birth certificates of children who patently weren’t abandoned. Yet, despite the fairly obvious fallout, the department appears to be both unrepentant, and even a bit bemused by all of the fuss.

When I held my daughter’s unabridged birth certificate for the first time, I was overwhelmed with relief: relief that the details were correct, and that it had taken less than a year for the Department of Home Affairs to produce it (both minor miracles for adoptive families who routinely wait several years for their children’s birth certificates, only to discover that the details are wrong). I was so relieved that I didn’t notice an obscure field at the bottom of the document labelled: ENDORSEMENTS. As it happens, I have since checked (when you read the article you will understand why), and my daughter’s birth certificate doesn’t have any “endorsements”, but other children’s do – shocking ones.

The worst that I have encountered contains that one word: “ABANDONED”.

Abandoned, it is a word that has a very specific meaning… [read more]