Posted by Robyn in Child protection, News articles on 27 Oct, 2017 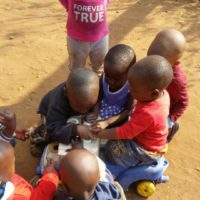 0 Flares Twitter 0 Facebook 0 Google+ 0 Email -- Filament.io 0 Flares ×
Just days before the start of Child Protection Week 2017, a physiotherapist in Soweto made the horror discovery of a nine-year-old disabled boy, naked, rat bitten, covered in faeces and starving to death, one of 14 living in a tiny shack. He is the face of undocumented children in Gauteng, he is the reason why we can no longer ignore the problem.

Child Protection Week 2017 drew to a close last Sunday, and the Department of Social Development packed away their green pins and posters for another year, and the minister returned to the pressing matters of politics that had kept her away from the event’s launch. But the spectre of the country’s child protection problems – those discussed, like exploitation, child-headed households and child marriages; those studiously avoided, like abandonment and late-term abortion, and those which other government sectors kept in the spotlight, like violence against children, and child rape and murder – will loom large over the nation for many years to come. They must, because no amount of awareness has brought respite from the atrocities towards children.

Before the week’s events were concluded, a 4kg “foetus” was found dead and dumped in a plastic bag following an apparently (very) late-term abortion, and the body of a five-year-old child was found under a bridge with her face mutilated. It’s hard to keep calling it a crisis, perhaps tragedy is more appropriate.

But in light of this year’s theme – “Let us all protect children to move South Africa forward” – one of the week’s most positive developments was the indaba on undocumented children in Gauteng, hosted by the Gauteng Provincial Department of Social Development in conjunction with the Department of Justice, Department of Home Affairs, Lawyers for Human Rights, and the National Adoption Coalition.

I say positive, but this is South Africa where nothing is simple, and from the outset, it was clear that competing agendas have made the issue both immensely complex, and tense. On one end of the spectrum is the Department of Home Affairs, committed to maintaining the integrity of the National Population Register, with a view to keeping the basket of services provided by government (including education, healthcare, housing and social grants) for South African citizens only.

It is a sympathetic position, especially now that our shrinking economy, multiple ratings downgrades and the government’s penchant for sharing our wealth with the undeserving, has led us into a recession. As times get tougher, the desire for people to hang on to the little that they have has created conditions that are ripe for xenophobia.

Coincidentally (perhaps), on the same day as the indaba began, the new Minister of Home Affairs (Hlengiwe Mkhize) went on the offensive against immigrants with some rather inflammatory words: “If we do not manage the process of free movement within the continent, we could end up with a crisis,” she said. “Remember our triple challenge [unemployment, poverty, and inequality] is real and we know from other parts of the world that that’s what triggers a revolution. People will revolt against the government of the day if they feel they’re in competition with everybody.”

Countering this alarmist view are those who point out that the country has a legislative framework and moral imperative that requires us to provide care and protection to all children in South Africa, regardless of their citizenship (Section 1 of the 2005 Children’s Act). In addition, our Constitution states that every child is entitled to a “name and nationality from birth” as well as to “basic nutrition, shelter, basic health care services and social services” and “the right to basic education” (Sections 27, 28 and 29 of the SA Constitution). The Constitution also states that decisions need to be made in the best interests of the child. It is a directive that in many cases we are failing to achieve.

During Child Protection Week, a baby was born at Park Station because her mother, an asylum seeker from the DRC, was allegedly refused emergency medical care. If that wasn’t shocking enough, the couple also claim that following the birth, Charlotte Maxeke Academic Hospital not only refused to assist the mother, but also wouldn’t examine her baby, even though they had observed her turning blue. The family were told that they were in the “wrong place” and were transferred to another hospital where they finally received care hours later. It is noteworthy that the Minister of Health is disputing the facts of this case. But social workers confirm that it is common for foreigners to be turned away from receiving medical care, or to be forced to pay exorbitant amounts of money before getting treatment.

When faced with such atrocities, it is harder to accept Home Affairs’ moral high ground, especially given the extent of the problem. But herein lies one of our major dilemmas. We have no idea how big the challenge is. At the indaba, the Gauteng MEC for Social Development, Nandi Mayathula-Khoza bemoaned our inability to quantify it, and the fact that Statistics South Africa had declined to be present. Their absence from the indaba was almost as telling as the rather uncomfortable, but apparently justified absence of the Department of Social Development’s International Social Services (tasked with managing the care of these children). Stats SA’s excuse was that rapidly shifting migrant populations have made our census-based data inadequate. This is certainly valid but, ironically, it is their lack of documentation which makes them hardest to track. In addition, the criminalisation of irregular migrancy and fear of being deported makes many foreigners shy away from officials. Still, statistics could have provided a starting point. Instead, the MEC had to rely on international data showing that more than 3% of the world’s population currently live outside of the borders of their country. Her only local statistic was that there were 700 new arrivals in Musina in the first quarter of the year alone. Most noteworthy though was her description of the problem as a humanitarian emergency. Given that she is responsible for finding a solution, this is unlikely to be hyperbole.

And they are not the only children rendered stateless by South African policy. Lawyers for Human Rights (LHR) distributed a pamphlet during the indaba about Childhood Statelessness, emphasising how it leads, during childhood, to the child not being able to access education, medical care, or grants, and a high risk of trafficking; and in adulthood, to possible arrest and deportation. LHR stresses that South Africa’s obligations under the Convention on the Rights of the Child (CRC) are that no child should be left stateless. [read more]